We have a new website!!! For all future updates check it out.

Join a committee, volunteer to be a Board member and find out what is happening in our neighbourhood.

Note: NENApayments@gmail.com has been set up to receive donations and payments automatically through email transfer. No security question required. 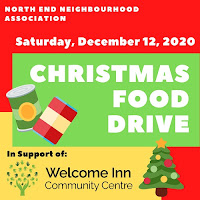 Most residents of the North End know the Welcome Inn. They are a fabulous charity working in our neighbourhood. One of the biggest things they do is provide food for those in need, and this year they are reporting an even greater need than in years before.

So NENA is here to help! We are organizing a FOOD DRIVE for Saturday, December 12th. Bins will be placed around the neighbourhood for you to drop your food off at. Just look for a sign!
Please note there will not be people going door to door

Strachan at Catharine (by the pathway)

548 Hughson North (between Burlington and Brock)

353 Hughson N (Between Strachan and Simcoe)

422 John Street (across from Bennetto Field)

154 Ferrie East (between Mary and Ferguson)

48 Macaulay W. (between Bay and Macnab) 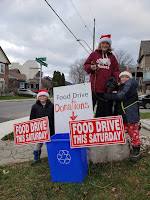